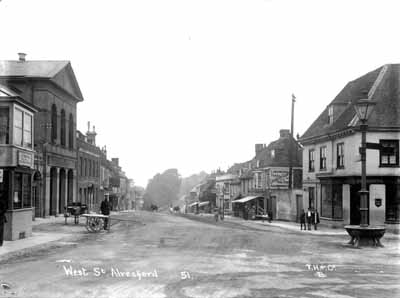 West Street still contains two of the original coaching inns of Alresford. Until the mid-seventies they retained their coach entrances which ran through the centre of the facade of each building opening up into cobbled passageways to the yards at the back of the Inns.

The Alresford Community Centre opposite the top of Broad Street was built in 1865 as the Market Hall and Assembly Rooms. It was built on the site of a pub called The Rose and Crown which replaced the earlier Fox Inn following the fire of 1689. The original Market House, located in the centre of Broad Street was taken down in 1824.

No. 1 West Street, adjacent to the passage to the Church, was once a "slopshop". Slops were cheap, ready made clothes, loose fitting smocks and trousers, used by labourers and farm workers. In 1802 the shop became a men's outfitters under the ownership of the Royle family.

Opposite the community centre on the corner of Broad Street the Wessex Pharmacy was once another of Alresford's Inns dating back to the 18th century.

William Hunt was born at 33 West Street in 1835 and trained as a surveyor. Over the years he was involved in many building projects in the town, including the Old Fire Station, renovations and improvements to the Parish Church and No 36 across the road which he designed and built for his own use in 1868. He was elected a Burgess in 1865 and he also served as the town's bailiff on at least three occasions prior to his death in 1914. The Hunt family brewed beer in the town for over 130 years and during that time had owned many of the licensed public houses in the town.