THE MEDIEVAL SOKE BRIDGE IN ALRESFORD 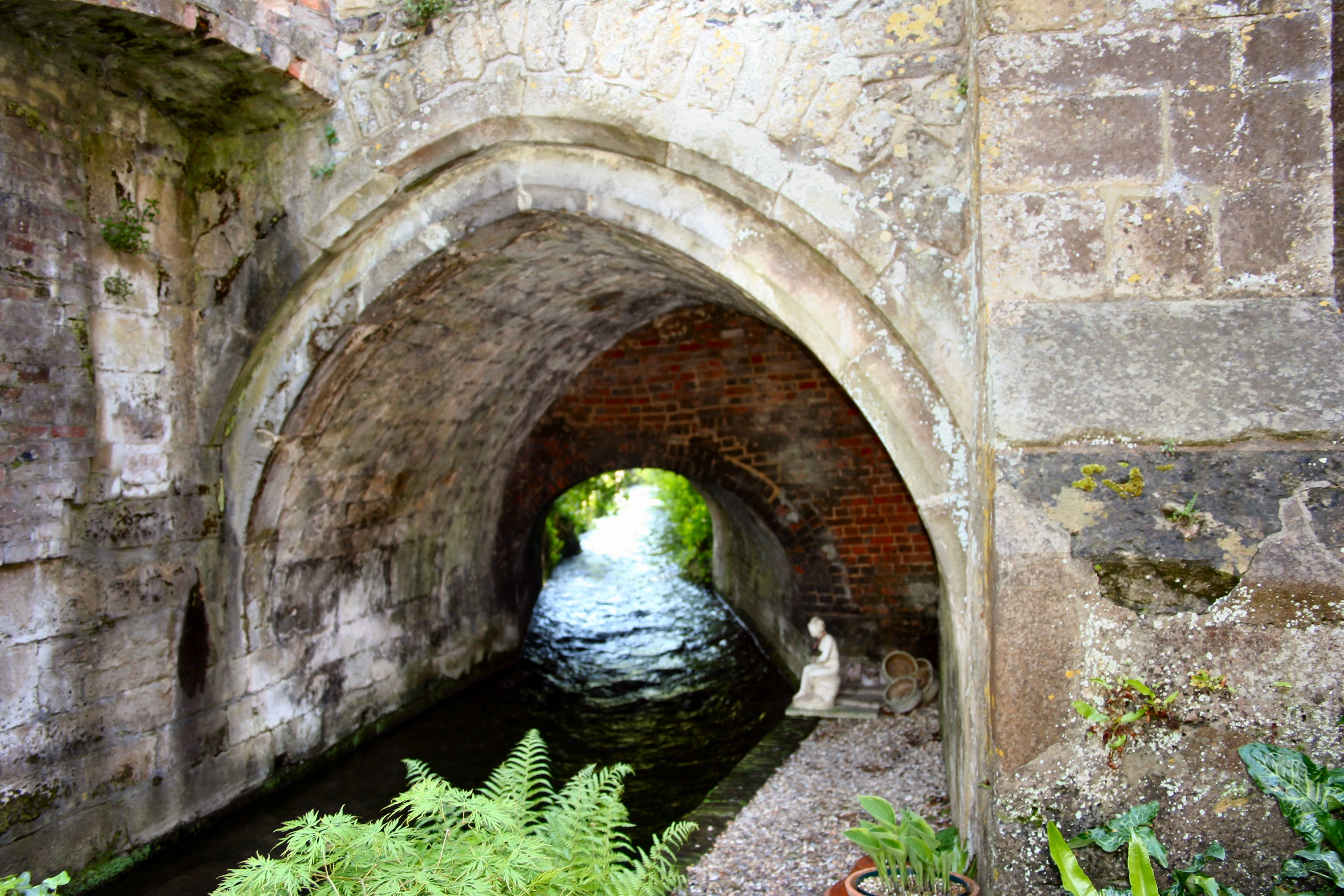 Henri de Blois, brother of King Stephen and Bishop of Winchester, is credited with the idea of building the Great Weir or dam and designing the T-shaped town of Novum Forum, soon to become New Alresford. He died before the implementation of the project and Godfrey de Lucy, his successor as Bishop (1189 - 1204) finished the work. By drying up the marshy flood plain to the west the construction of The Weir provided access to the main Winchester to London road which at that time ran to the north of the river through Old Alresford. Despite myths about canals (that the pond was designed to enable the canalisation of the Itchen), the pond was created to provide fresh fish for the bishops of Winchester at their residence of Bishop's Sutton and was probably the work of Bishop Henry of Blois in the twelfth century. Such ponds were characteristic of the medieval landscape and a key part of the diet of the upper classes, and that at Alresford is particularly well documented.

New Alresford, with its long burgess plots running back from the market street, was one of several new towns, created by the bishops of Winchester, in this case by Geoffrey de Lucy. It is clear that the market street was not aligned on the dam, but on a road (now a track called 'the little weir') which continues northwards from the market place, making a sharp descent down to the river Alre, and then up on the opposite side of the valley to Old Alresford.

Later the route was changed to create the diversion over the dam that is still with us. It is perhaps an obvious matter of practicality as to why the town created in 1200 did not use the dam as a roadway. Having a road on a recently made up earthen structure would both be difficult for users and likely to damage the structure of the dam itself. But when and why was the route changed?

Here we need to turn to the magnificent pipe rolls of the bishops of Winchester who owned Alresford and created the new town or burgus of Alresford. These records are exceptional both in their completeness and their early date, surviving from 1208-9. The entry for the town in the published account for 1301-2 provides a clue in the unusual item in the entry for decayed rents. Thirteen properties paid no rent as a result of Solomon of Rochester and his fellow justices having pulled them down at the assizes at Winchester because they were a nuisance to the neighbourhood and those passing through. This means that Solomon had ordered them to be pulled down, or more probably had given the approval of the law to the bishop's plans. Here was evidence of some replanning of the original town layout. It is suggested that this replanning may have been associated with the decision to divert the road onto the dam where it still lies. This would have required some of the properties at the north end of the east side to be removed, in order to provide access from the higher ground of the town to the surface of the dam. The advantage of this loss of rental would be to avoid the sharp descent to (and climb from) the river below and the damp ground around. But just as the account for 1409-10 provides us with long out of date information, so too does that for 1301-2. It tells us that the changes had already taken place not when this had occurred. To determine this we need to turn to earlier accounts. By doing this we can establish that the first time these decayed entries occur was in 1282-3, and that, they were not present in the previous surviving account, that for 1277-8. One of the necessary requirements for this redevelopment was the insertion of a bridge that would maintain the road surface at the horizontal and avoid the decent to and climb from the river, and would still allow the exit for the water from the pond. The dam and weir were needed both to control the water level in the fishponds, and to power the mills below the dam. The repeated references for payment for timber and boards to repair the bridge suggest that it was initially built of wood.  But at some point this was replaced by the present stone bridge, and this can be dated by the pipe rolls to 1307-8 when £12.3.11d was spent on rebuilding the bridge of New Alresford. This included £8.13.4d on the purchase of freestone and on making the bridge, and smaller amounts on the carriage of the freestone, on lime made and on walling stone collected and brought.

Although the simple nature of the bridge make it difficult to date precisely it is probable that it dates from the late 13th Century. It comprises a single gothic arch of cut stone voussoirs, which remain visible. Underneath the arch at water level are rectangular recesses, which may have supported a timber framework during the construction of the bridge. The arch is flanked by two stepped stone buttresses of which the easternmost is encased within the wall supporting the neighbouring property. The medieval bridge, which measures approximately 3m wide, was modified and extended in at least two stages.  The bridge was widened on the upstream (south east) side with a 3m wide brick arch at an unknown date before 1870, as mapped evidence suggests.  During the 17th century a brick parapet was added on the downstream side, topped by copings, which are possibly the original reused 12th century stones.  The upstream face of the bridge was modified in 1881, when a red brick arch and parapet were added. During the same year the Old Fire Station was built. Alresford Bridge, despite post medieval additions, remains well preserved and is amongst the earliest stone bridges surviving nationally.

The above is based on original material produced by John Hare, Peter Symonds College and material published by English Heritage