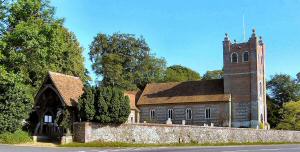 The original church was believed to have been built in the ninth century in the reign of Ethelwulf.

The body of the church and the chancel were taken down and rebuilt in 1753 followed by the tower in 1769, the bells being cast and hung in 1770.

The Mothers' Union was founded in Old Alresford in 1875 by the then rector's wife Mary Sumner. A tablet to her memory was placed in the church in 1936.