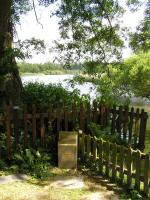 On the 26 September 1943 the B17 Flying Fortress "Lady Luck", carrying a full bomb load, got into difficulties over Alresford. Captain Robert Cogswell ordered his nine crewmen to bail out remaining on board the aircraft himself in an attempt to steer the bomber away from the town. The plane crashed just east of Old Alresford Pond Captain Cogswell having jumped to safety himself shortly before it crashed.

The plaque in Soke Gardens honours Captain Cogswell of the 303 Bomb Group, US 8th Air Force and his conduct in saving Alresford from a potential disaster.

Soke Gardens can be found down the lane to the right of the Globe on the Lake pub at the bottom of Broad Street.