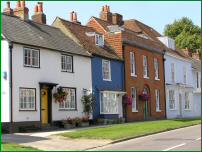 East Street was formally known as RAM Alley and has many attractive cottages and houses painted in glorious pastel shades. No 9 was originally an alehouse and until recently was the Peaceful Home pub.

A number of houses in East Street were "fired" when the defeated royalist army retreated through Alresford in March 1644.

At the end of the street on the corner of Sun Lane is a house called the Old Sun. This was the Sun Inn until the late 1950s when it was converted into a home. For some years it was the home of John Arlott, journalist, cricket commentator and wine connoisseur, who made ample use of the original wine cellar.