Broad Street was originally laid out as a market place in Bishop de Lucy's plan of around 1200. The street has also been used for sheep fairs, pleasure fairs and military gatherings over the years. Even today it is the centre of the town's celebrations for Christmas, jubilees and anniversaries.

The Great Market was held in Broad Street on the Thursday after Michaelmas Day but it was changed by Act of Parliament in 1752 to be held on the first Thursday after 11 October and its survivor, the annual 'fun fair', is still held there at that time to this day. 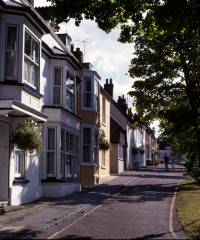 Broad Street has many interesting houses and shops many dating from the rebuilding of the town following the last great fire of 1736. At that time it was ordered that the town be rebuilt using brick and tile resulting in the many Georgian buildings forming the centre of the town today.

Mary Russell Mitford, the author of 'Our Village' was born at No 27, on 16 December 1787, and a commemorative plaque can be seen on the front of the building.

The George Yard, now home to a builders merchants, was the site of the George Inn and was owned by Winchester College from medieval times until 1927. It was named The George in 1415 in celebration of the assistance given by St George to Henry V at the Battle of Agincourt. The oldest Inn in the town was reputably The White Hart which once occupied the site of No 42 but was probably burnt down in the fire of 1689.

No 46 was the site of the last working blacksmith in the town At one time there were by all accounts fourteen blacksmiths and seven saddlers in the town.

There is another plaque on the wall of No 50 commemorating this has the HQ of the 9th US Army 47th Infantry Division in 1943/44. Hambone Junior the canine friend of these soldiers is buried on the banks of the Alre close to the bottom of The Dean. See also the plaque in Soke Gardens commemorating Captain Robert Cogswell.

Look at the houses opposite and see if you can see the false window painted on the front of one of the double fronted houses probably a hangover from the window tax. Its Cranley, number 43.

At the bottom of Broad Street is The Old Fire Station designed by local architect William Hunt and erected in 1882. It continued in use until 1940. Recently re-furbished it now houses a horse drawn Victorian steam driven pump fire appliance and is open to the public on selected days of the year.

At the opposite corner is Mill Hill. This was originally the industrial area of the town where the tanneries were to be found and would have been a rather unpleasant and smelly area once upon a time. Many of the houses here are very old having survived the numerous fires that destroyed much of the town and it is now a delightful backwater on the path to Old Alresford or the Fulling Mill. Note the lychgate and the garden beyond to your left as you walk down the hill.