What is a conservation area?

A conservation area is an 'area of special architectural or historic interest the character of which it is desirable to preserve or enhance'. Designation recognises that an area, as opposed to individual buildings, is special and warrants additional protection. The Local Planning Authority has a legal duty to formulate and publish proposals for the preservation and enhancement of Conservation Areas. In accordance with national guidance, the City Council has undertaken an assessment of New Alresford to identify the special qualities that form its character and justify the continued designation of the area as a conservation area. 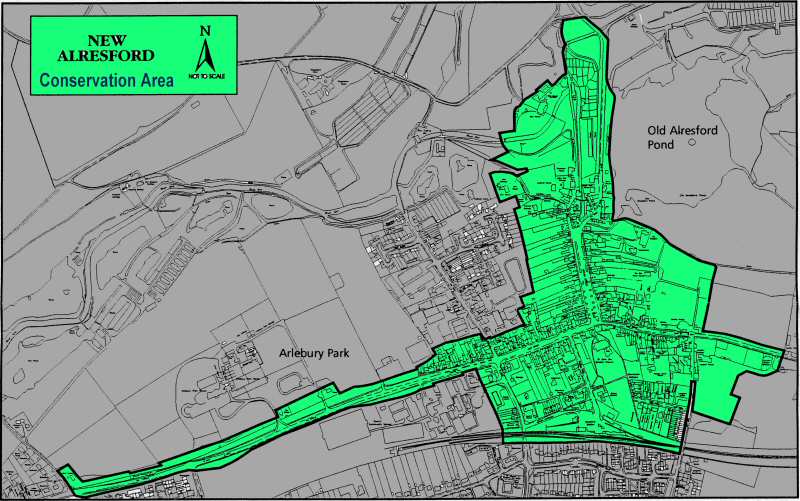 New Alresford is located approximately six miles east of Winchester and is set within gently undulating topography. The compact settlement is situated to the south of the River Alre and to the east of the River Itchen. it is an outstanding example of a medieval planned market town. The designated Conservation Area boundary incorporates three main medieval streets, namely West Street, East Street and Broad Street, as well as Pound Hill and The Soke, and includes around 250 buildings of which just over half are listed. Even though the town fell victim to numerous fires throughout history the layout of New Alresford today is almost identical to that of the 13th Century.

The character of New Alresford consists of varied areas of open space, tree cover, water features and historic buildings. West Street, East Street and Broad Street, including areas to the rear, represent the residential and commercial core of the Conservation Area. Almost continuous lines of buildings dating from the 17th to the 19th Century create a strong sense of spatial containment. Providing a variety of small shops, this part of the town is very colourful with hanging baskets, painted buildings and trees which generates a lively atmosphere for residents and visitors.

'The Weirs' is in the northern part of the Conservation Area and includes Mill Hill, Ladywell Lane, The Soke and The Great Weir. The buildings in this area are predominantly in residential use, with properties at Mill Hill and The Soke fronting onto the roads, whilst those at Ladywell Lane are larger, detached and set back off of the road. To the north of this area sit watercress beds and Arle Mill. This part of the Conservation Area offers riverside walks and a peaceful retreat from the traffic and bustle of the town centre.

The Station area is the latest addition to the Conservation Area, dominated by the Station itself. The Watercress Line is a popular tourist attraction running a steam railway. The railway, with its sights, sounds and smells, the network of alleyways and the community facilities located here all contribute to the intimate, 'bustling' character.

How does the Conservation Area designation affect what can be changed?

Designation gives the Local Planning Authority a firmer hand "when dealing with proposals for new development and alterations that would affect the character of the Conservation Area. Within conservation areas, a number of special controls apply and it is advisable that anyone proposing development, demolition or work on trees, should seek advice from the Planning Department at an early stage. Legislation designed to retain a conservation area's special character and appearance may be summarised as follows:

Things to be avoided

The designation of a conservation area should be seen as a public statement that the Local Planning Authority recognises the special historic or architectural interest of an area. With this it is hoped that increasing public confidence will be demonstrated by the efforts of the local community to invest in the restoration and maintenance of older buildings and the general upkeep of their surroundings.

In order to help achieve this the following alterations should be avoided.

In order to preserve or enhance the character and appearance of the Conservation Area, the Council wishes to encourage schemes for enhancements. These should either relate to the retention, repair and maintenance of features that contribute towards the special qualities of the area, or relate to significantly damaging and/or intrusive features. The following enhancements are therefore to be encouraged.

Unpainted brick and flint work should remain so.
Use of traditional mellow colours.

Attention to detail and a lack of intrusive and garish shopfronts and signs have been and continue to be important for the retention Alresford's historic features. Care must be exercised in design, detail, colour, lettering and materials. Winchester City Council has produced guidelines, titled "Design Guidance for the Control of Shopfronts and Signs" to form the basis of applications and general guidance for retailers.

Please check with the Development Control Section of the Planning Department before undertaking any works to buildings, walls or trees.