The Civil War in Hampshire
and The Battle of Cheriton 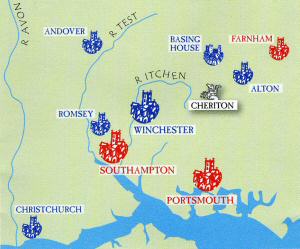 Between 1642 and 1649 Britain was divided by bloody civil war. On one side stood King Charles 1 a believer in the Divine Right of Kings, and his Royalist supporters. On the other were those who supported the rights of the people through the House of Commons, called Parliamentarians. The country was divided - son fought father and brother fought brother.

On 29 March 1644 the Battle of Cheriton was fought, and it proved to be a turning point in the war. Within five years King Charles I was to lose his head and the country entered a period of republican rule known as the Commonwealth.

The map left shows the Royalist controlled centres in blue and those under the control of Parliament in red at the time of the Battle of Cheriton, March 1644. There is a commemorative monument on the north side of the lane just to the north of (above) the 1644 battle sign on this modern day map.

The origins of the English Civil War are complex and because there is no simple explanation a common wisdom has arisen which most often results in King Charles I being seen as a martyr and Oliver Cromwell as a tyrant. Charles was certainly a martyr to his cause and in the latter years of the Commonwealth Cromwell could be regarded as a tyrant. However, in the evolution of english democracy Cromwell must be seen as the upholder of the rights gained by the population since Magna Carta and argueably, but not to his credit, of the democratic monachy that exists in Great Britain today. Cromwell's failing was not in overthrowing the monachy but in his failure to establish a suitable regime to replace it making it inevitable that the people would revert to the "devil they new" albeit with a more controlling hand from Parliament.

Charles I as a monarch left a good deal to be desired and during the 1630s, his apparent determination to rule England without the assistance of Parliament, his introduction of all sorts of controversial financial measures and his support for 'high-church' religious practices aroused considerable alarm among his subjects. Many people, particularly the more zealous protestants, or 'puritans', came to fear that Charles was pursuing a hidden agenda: that he planned to remove his people's rights, or 'liberties', and to restore England to the Catholic fold. It must be remembered that Queen Elizabeth I had died less than 30 years before and the Catholics were caught trying to blow up Parliament just 25 years earlier. Many saw the 'new' Church of England as just another form of popery and were more inclined to the more radical protestant religions and Puritanism established in England.

In January 1642 Charles attempted to arrest his leading opponents inside the House of Commons: an outright attack on Parliamentary privilege. King and Parliament were now irreconcilable and in August 1642 Charles raised his standard at Nottingham, signalling a declaration of war on Parliament.

The Road to Cheriton

The campaign season of 1643 started in the South-west, where Hopton, the commander of the Royalist forces, drove Waller and his Parliamentarians out of Somerset, Dorset, and Wiltshire. Hampshire was now in the front line and after unsuccessfully besieging Basing House in November Waller avoided being drawn into battle with the Royalists during the Winter of 1644.

However, there were several minor engagements during the winter. In early December Hopton captured Arundel castle with no resistance whilst the next week saw Waller attack the Royalists quartered in Alton. Most fled but a desperate last stand was made at St. Lawrence's church where the Royalists surrendered. 500 of the remaining troops joined Waller's army. Waller retook the town of Arundel on the 19 December and the castle was surrendered on 6 January 1644.

Early March 1644 saw the Royalist and Parliamentarian armies marching and countermarching to gain control of the eastern approach roads to Winchester. On 25 March the two armies were within two miles of each other and skirmished throughout the next two days. The Royalist army gained Alresford and set up camp on the high ground of Tichborne Down. The parliamentarians camped across the valley on a lower ridge at Hinton Ampner. The scene was set for an epic showdown, the result of which was to influence the character of the Civil War south of the Thames.

In the 1620s two young men, William Waller and Ralph Hopton, served together on the continent in a conflict known as The Thirty Years' War. They became close friends and together rescued King Charles I's sister from the besieged city of Prague. On their return to England, Hopton went home to Somerset and Waller moved to his residence in Winchester Castle. Both became Members of Parliament, but Waller became increasingly unhappy with Charles 1's unconstitutional rule, while Hopton's support for the King grew. Although they were to retain a relationship, the subsequent Civil War shattered their friendship.

The Field of Battle

The battle took place in a gentle valley which is little changed in the last 360 years - if anything it is more open today than it was then. If you stand by the commemorative memorial facing south, in what would have been the middle of the Royalist lines, you have a good view over the field of battle. Across the Lamborough fields you can see the southern hill rising to Hinton Ampner where the Parliamentarians where encamped.

To your right is the village of Cheriton and to your front left is Cheriton Wood, with Bramdean beyond. Cheriton Wood is bigger today than it was in 1644 and the expansion has been towards the west - it would have been perceived as being further to the east at the time of the battle.

The Battle is set

The 17 March saw both armies preparing for the forthcoming campaign season. Waller was marching through Sussex towards Winchester. Hopton had been ordered to retire to Marlborough but after meeting with Lord Forth in Winchester the two Royalist generals, on learning that Waller was approaching East Meon, decided to confront him at Warnford.

The opposing armies now faced each other and there were several minor skirmishes. The Parliamentarians endeavoured to cut the Royalists line of communications with Winchester and this saw two opposing brigades of horse marching on Alresford. In the event the Royalists reached Alresford first and encamped on Tichborne Down. The 28 March, the eve of the battle, saw both armies strengthening their positions - the Royalists on Tichborne Down and the Parliamentarians facing them on Lamborough fields to the north of Hinton Ampner - the minor skirmishing continued and thebattle was set. 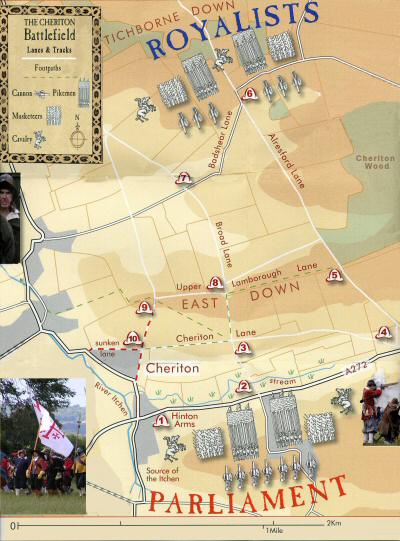 During the night and the early hours of the 29 March Waller dispatched troops to occupy Cheriton Wood and Hinton Marsh village on the east and west flanks of the field. Some time after sunrise Hopton discovered that Waller was not withdrawing but had occupied Cheriton Wood. The Royalists engaged their enemy in the wood and amidst much confusion, forced the Parliamentarians into retreat. This early defeat demoralised Waller's army and heartened the Royalists many of whom wished to engage with the Parliamentarians immediately. However, Forth held the day being of the opinion that they possessed the best ground and Waller would be forced to retreat or charge with the terrain to their disadvantage.

It would appear that some of the Royalists, possible enthused with their early advantage or acting on ambiguous orders, launched an attack on Waller's left flank heading for the village of Hinton Marsh. Meanwhile the Royalists were also continuing to press home their advantage on their right wing but may have pursued their foe to far as they were repulsed and were subsequently forced to give up the wood. At Hinton Marsh Waller's cavalry successfully drove back the impetuous Royalist advance and at the end of the morning Hopton was left to consider how his advantageous position had deteriorated and what to do next.

The Parliamentarian foot now pressed home the advantage gained by their cavalry and within the course of an hour drove up the hill causing the Royalists to withdraw in disarray. The Parliamentarians had won the day.

The village of Hinton Marsh is left smouldering and contemporary accounts describe the field as being strewn with bodies. However, whilst the exact number of dead is unknown the Parliamentarians believed they lost less than 60 men and the Royalists admitted to losing some 300 but denied accounts of 400 to 1000 dead. In reality the losses were probably about 300 - 500 on each side.

Only four to five houses were lost to fire in Alresford as the Royalists retreated despite their attempts to raze the town.

Winchester in the Civil War

As in most places in Britain, the loyalties of the people of Winchester were divided. Of the city's two MP's, one supported parliament and the other the king. The city sat in a major strategic position, controlling the road from Southampton to the north, and the western road from Portsmouth. The city was to pay a heavy price for this strategic position. In December 1642 the Royalists entered Winchester Castle, closely pursued by Parliamentarians who captured and ransacked the city. The next day the ill-prepared Royalists surrendered the castle. In 1643 the city and castle were retaken by the Royalists and the defences of both were strengthened. In 1644, after the Battle of Cheriton, the Parliamentarians under Waller once again captured and sacked the city, although the castle remained in Royalist hands. The castle was taken by Oliver Cromwell on 5 October 1645, at about the same time as he captured and demolished Basing House, another Royalist stronghold in Hampshire. Soon after the castle was blown up and made unusable.

Civil War foot regiments consisted of pikemen and musketeers formed of companies of 100 to 140 men each. The pikemen whose main weapon was a 16foot (5m) ash pike tipped with steel stood in blocks eight ranks deep with the pikes of the front three ranks levelled at the enemy. When two blocks of pike met the rear ranks pushed those in front forward driving through the opposition.

Musketeers could either be used en masse to deliver a devastating volley or as in Cheriton Wood tactically in small groups. They wore the distinctive bandolier, a leather belt slung across the chest, from which hung containers with a measured charge of powder. The front-loading matchlock musket was fired by a slow-burning taper setting off the main charge, firing a lead ball the size of a marble with a range of 100 metres It took an experienced musketeer 30 - 60 seconds to reload but with the gun weighing up to 6kg, it could also be used as a club in hand-to-hand combat.

The basic unit of cavalry was a troop of between 21 and 80 men under the command of a captain. A regiment could consist of three to ten troops. There were two types of cavalry. The cuirassiers were heavily armoured and carried pistols, carbine and sword. The harquebusiers, who formed the bulk of the cavalry at Cheriton, used similar weapons, but were less heavily armoured and therefore more manoeuvrable.

Artillery consisted of a range of guns of different sizes and design. The pieces at Cheriton had a range of 650m with ball and up to 200m with canister-style shot.